Prime Guesser 1 and Prime Guesser 2 are two cryptography challenges where a user guess the prime factors of an encrypted number. To help the user had acess to an oracle that tells whether a ciphertext is 0 or not. Prime Guesser 1 had access to an extra Oracle but the exploit was basically the same. The encryption scheme seemed to be based on Polynomials.

The Challenge server employed a custom polynomial based encryption protocol. The server will send you an encrypted number between 11 and 200 and the goal is to send back a set of prime-factors of the encrypted number.

Between each encrypted number you can query an oracle any times you want that returns True or False whether a ciphertext corresponds to the plaintext 0. In PrimeGuesser 1 you also have access to an oracle that will encrypt the number 1 - 20.

You need to send back the correct factors 100 times to get the flag. 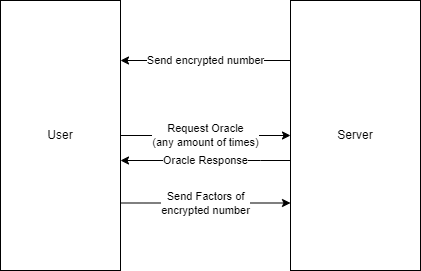 The interesting part of the challenge is the encrypt function. It just adds a scaled plaintext on top of an array of some random numbers. Using the oracle, we can easily recover the plaintext from any ciphertext. While the 165 lines can look very intimidating, only a few were actually relevant to solve the challenge.

Key differences in PrimeGuesser 2 were:

The encrypt function just added the plaintext on top of some random junk. If you add a decrement the ciphertext[0][0] with a certain you the plaintext also decrements by one. Using the oracle this is enough to calculate the original plaintext.

Knowing that are known global variables this is essentially:

Since only gets added at the end and mostly consists of zeros, we can easily modify a ciphertext to return a different value:

We get the following ciphertext:

If we modify only the first number of like this:

We reduced the by one. This is also something we can repeat infinitely. To solve the challenge we then only need to substract 1 for the plaintext each time, until the oracle returns true. The code might look like this:

Getting q and t

Interestingly with our approach Prime Guesser 2 is already solved, since and known.

To get and in Prime Guesser 1 we follwed the Guesser part and just eyeballed the values:

Our exploits follows the vulnerability description. Since we need to find 100 numbers and each number is randomly split between 11 and 200, we should need approx. requests to the oracle. In practice this meant that the exploit takes around 10 minutes to run.

This writeup showcases how you don’t have to understand a whole encryption scheme to exploit it. We are able to modify corresponding plaintext to a ciphertext to decrement it in steps of one. With the Oracle that told us whether a ciphertext corresponst to zero, the exploitation was quite easy.